our first numbers: how many rocks do you have?

Counting stuff is as ancient as we are. Around 30,000 years ago, even without a written language, our ancestors were counting stuff by bending their fingers, or pointing out to stones, or making marks with sharp stuff on bones which we now call the tally marks (also called hash marks.) Clusters of five strokes made it more legible, and different groups of people all around the world invented the tally system in slightly different ways, but always with the same logic- clustering 5 strokes in an order.

The written language came later than the spoken language, when humans began to build more permanent social groups and start to grow their own food. I guess at some point somebody thought writing numbers with tally marks took very, very long when the numbers get bigger, and it was cumbersome for the person who was reading it as well. So at some point, humans decided to use symbols to indicate certain numbers, and these symbols are called the numerals.

Some experiments and observations show that animals also seem to have a good number sense. For example in the insect world, mother wasp lays her eggs in individual cells and provides every cell with a certain amount of caterpillars for her hatchlings. Some subspecies of wasps provide 5 for each, another one provides 12, and another one does 24, but they always provide the same number of caterpillars for each egg. Another subspecies (the solitary wasp in the genus Eumenes provides five caterpillars if the hatchling is going to be a male, and ten caterpillars for a female (unequal for a good reason: males tend to be smaller than females). Humans share this innate sense of numbers with other animals. Human children under 18 months are sensitive to small changes in small quantities (values up to 3 or 4). If you are interested in how the numerical sense develops in human children I suggest you read this article.

The Babylonian numeral system is the first known positional numeral system, which means a value of a digit depends on the position of the digit.

This is what the ancient Babylonian numeral system looked like:

The ancient Egyptian counting system (appeared around 3000 BC) used objects from everyday life to symbolize numbers and used base-10. A rod meant 1, a cattle hobble was 10, a coiled rope was 100, a lotus flower was 1000. They didn't have the concept of positional notation.

This is what the ancient Egyptian numeral system looked like:

Ancient Egyptians also had a symbol for zero, but as their system is not positional, it was mainly used to indicate the base level of the structures they were building (like pyramids!).

Ancient Romans invented their own numerals. These numerals were widely used in Europe until the more efficient Arabic numerals took their place. Romans used selected letters from the Latin alphabet to indicate certain numbers. For example "I" was one, "V" was 5, "X" was 10, "L" was 50, "C" was a hundred, "D" was five hundred and "M" was one thousand. Every other number was constructed from these 7 numerals. They also invented a method, when you write multiple symbols, you take the biggest symbol, and if there is a symbol on their left, you subtract them (like IV, which is 4), if there is a symbol on their right side you add them (like VII, which is 7). So Roman numerals didn't have positional notation, this numeral system also lacked zero, but had a verbal equivalent, which was "nulla" (meant none).

This is what the ancient Roman numeral system looked like:

We still see Roman numerals around, in the clock face of Big Ben, or at the backside of the coins as the regnal numbers of kings and queens, or in movie sequels.

Civilizations of Central and South America

Central and South America (which is now Mexico, Belize, Guatemala, Honduras, El Salvador, Nicaragua, and Costa Rica, Ecuador, Chile) was home to 3 major ancient civilizations: The Mayans, the Aztecs and the Incas.

The Mayans were not a unified society but a combination of twenty culturally similar, independent states. They had a writing system, which enabled them to build a highly developed society, built beautiful cities and temples using stones and metals, observed the skies and made themselves a calendar, was occupied with mathematics, astronomy, art, architecture, and had a political, military and religious order. Unfortunately, one of the materials they used for their writings was tree barks, and much of it was destroyed by the tropical climate. Most of the other cultural remnants were destroyed in the 1500s by the Spanish conquerors. (In fact, all three ancient civilizations of America shared the same fate. They suffered from the attacks of Spanish conquerors and were devastated by the spread of smallpox.)

The Mayan number system dates back to the 4th century, and it had a base of 20. The theory is that as Mayans lived in a hotter climate, and for this reason, shoes were worn rarely, and the total number of fingers and toes around all the time was mostly 20. Mayans used two symbols to write their numbers: a dot (.) represented the single units (one through four) and a dash (-) represented five. These symbols when used together to write the numbers resemble an abacus, so it is speculated that Mayans might have used an abacus. An abacus is a counting frame that consists of rows and movable beads connected to those rows. Its origin is unknown, as it was used in slightly different designs throughout the world. Nowadays it is used as a tool to teach children mathematics.

The Mayan's were also the first to symbolize the concept of nothing (or zero). The most commonly used symbol for zero was a shell.

This is how Mayans showed small numbers.

Mayans used a base-18 system when making their calendar. They must have figured out that the Earth was spinning around one time around the sun in 365 days because they made their calendar exactly 365 days long. Each month had 20 days and there were 18 months in a year (20 * 18 = 360), and the 19th month of the year was just 5 days long (360 + 5 = 365), and those 5 days were believed to be filled with bad luck, misfortune, and danger. We still use a manipulated version of the 365-day calendar Mayans invented.

Incans were a highly advanced civilization that built huge cities, developed road systems, did trading, created jewelry from gold, became skillful potters, wowen beautiful fabrics, and treated their citizens fairly. What makes it even more impressive is that they did all of this without a written language.

How did they track important information? They did this using a tool made of knotted strings called a quipu. The men in charge of maintaining the quipu were known as the "keeper of the quipu." The fate of oral traditions and cultures are all the same, some of it is forgotten and only can be speculated. It is speculated that a quipu was used to keep records of the number of things. Another mystery about the quipu is, we can only guess the base they used. It seems like the Incans used a base-10 system.

Quipu was made by thinner strings that were looped around a larger cord. Now, Quipu meant "knot" in the ancient Inca language, and that is a very appropriate name for this tool because the numbers were indicated by knots of colored threads that were tied around the thinner strings. Where the knots were placed mattered, because that's how the value was indicated. The knots that were closer to the larger cord indicated bigger values. The way the knots were tied, or the varying colors of the strings might have meanings but as they didn't have a written language, we're unable to understand it.

Another society in the Oksapmin area of Papua New Guinea created a counting system (and a language!) where numerical representations were mapped on body parts. Their numerical system initially didn't include arithmetic functions, but after they began trading they also incorporated an arithmetic system into their counting system.

Here is a video of a woman displaying the Oksapmin counting system: 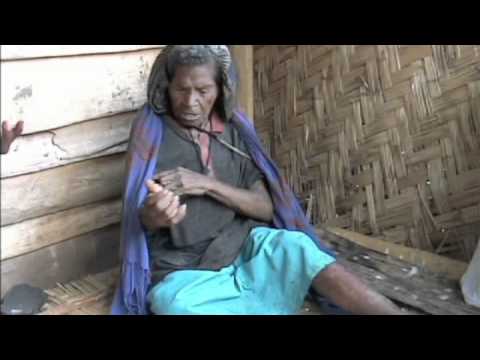 When we first learned to count as humanity, we used fingers for counting, and each finger represented a single unit. We named this system "unary". (un- comes from Latin and indicates one.)

A computer stores data in "binary", a system in which there are only two digits, 0 and 1 (and what a surprise, "bi" means two in Latin). Binary is also known as the "base-2" number system. These binary digits are known as 'bits'(binary digits).

At some point in human history, we created numerals between 0 and 9, and began to use a base-10 system (which is also called "the decimal system", also known as the "denary"). This number system is quite intuitive as we have 10 fingers ourselves. Both decimal and binary systems are positional number systems, meaning every digit has a positional value.

Now, imagine a bizarre animal with eight fingers on each hand, with preferably two hands in total. (Now I'm really curious about what you've imagined. But let's keep on keeping on.) This animal is also smart, and it wants to count the bizarre alien fruit it's going to eat because it's probably counting calories. So it looks at its 16 fingers and says "hey, I'm going to utilize these fingers when I'm counting stuff from now on". Our bizarre animal is now counting in hexadecimal, which is also known as base-16 (oh, Latin again. Hexa is 6 and deca is 10, so it's 10+6 system). The hexadecimal system uses our normal 10 digits (0 to 9) and also the first 6 letters of the English alphabet (A to F). The hexadecimal system is also a positional number system.